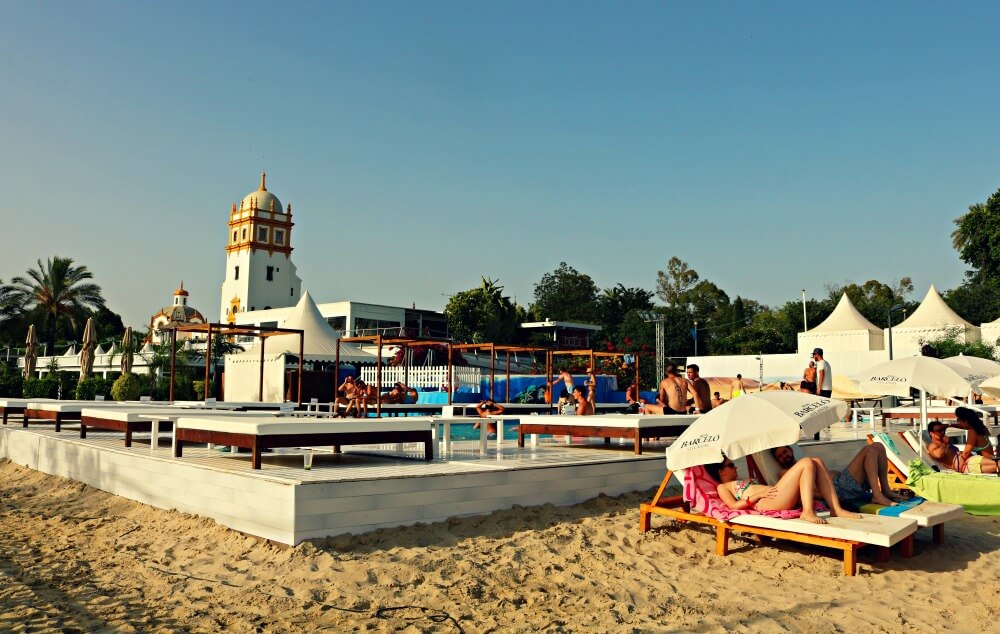 10 plans in Seville that you can only do in summer

1. Visit the monuments of the city without long waits
The city is quieter, there are fewer queues, and the photos look great without a lot of tourists in the background.
2. Attending the Vela de Santa Ana
If there is a neighborhood famous par excellence as the quintessential Sevillian, that is Triana. At the end of July (from the 21st to the 26th), there is a place on Calle Betis, along the banks of the Guadalquivir River, where you can enjoy the authentic magic of Seville: flamenco, grilled sardines and a good atmosphere.
3. Watch a movie in the summer cinemas
In Seville there are numerous summer cinemas (open air), with ambigú and current films, documentaries, original undubbed versions, etc.
4. Splash in the Magic Water, the park of Seville in summer
Seville has an amusement park called Isla Mágica, set in the Discovery of America and the pirates. For a couple of years, they have opened another park, aquatic, with wave pool, slides, and giant donuts. The perfect plan to spend the day.
5. Be enchanted in the Gardens of the Alcázar at night
Between June and September (except on Sundays) concerts take place at night in the best possible location. Fall in love with the Alcazar both in the daytime and nighttime. If you run out of tickets, you can also take a look at the poster of the Cartuja Monastery shows.
6. Eat snails
Most people think this is crazy! The truth is that not a lot of places serve snails like how they do in Seville. The secret here is the sauce! Some of the most famous places to eat snails in Seville are: Cateto, Kiki, Tremendo or Casa Antonio.
7. Take a cruise ... to Sanlúcar de Barrameda
Between May and September, every weekend, cruises sail from Torre del Oro to Sanlúcar (Cadiz), sailing through the water just like Juan Sebastián Elcano and Christopher Columbus did.
8. Siesta
In Seville in the summer siesta is almost obligatory, the best thing to do after eating is to take a nap. It is the hottest part of the day, so take advantage and rest to enjoy the night longer!
9. Stroll along the new Guadalquivir river bank and have a drink at the New York Dock
Take a nice walk along the newly inaugurated bank, especially at sunset. In addition, in the area known as New York Dock, you will find several chill out terraces with music and watch the sunset with a mojito in your hand.
10. Go to the beach in Seville
You can enjoy the beaches in Huelva and Cadiz from Seville in just less than an hour and a half. Another option is to go to the Beach Club that they have inaugurated in the Muelle de las Delicias, it is known as the Beach of Seville because it has several pools, umbrellas, sand, and you can even surf.
11. Go shopping during the Big Sale
July and August are the best months to go shopping. Visit the Sierpes street, one of the classic shopping streets at the centre of Seville, where they place tarpaulins to give shade to the shoppers.