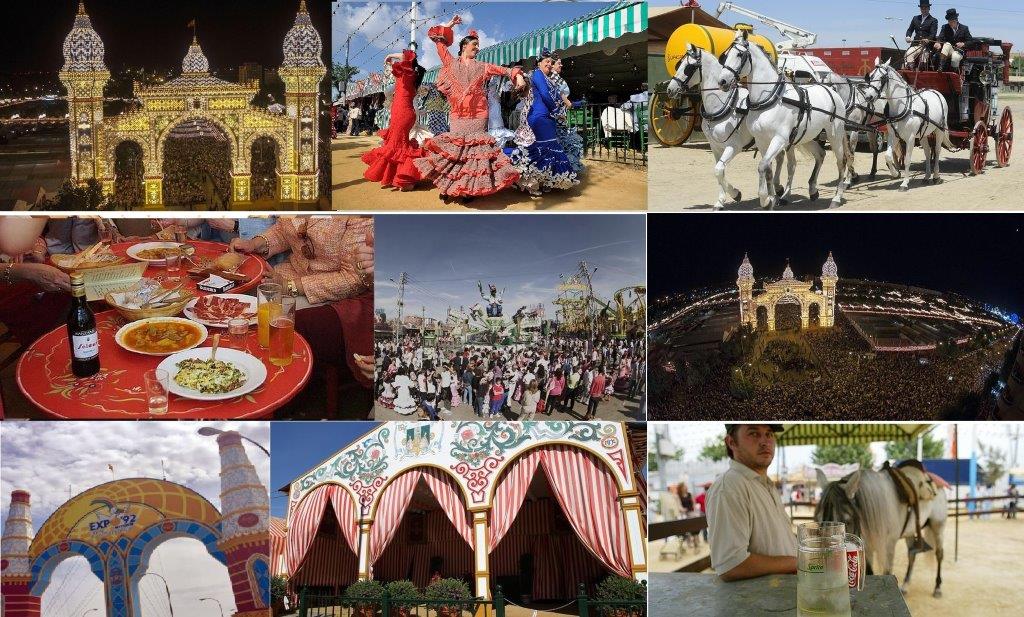 1. The lighting
The beginning of the fair is marked by the «alumbrao». It is the lighting of the thousands of light bulbs that decorate the front page and the entire fairground and that takes place on Monday at 12 at night. Each year the cover design varies with different themes. For example, they can reproduce emblematic buildings or engage in meaningful events related to the city.

2. The Street of Hell
The area dedicated to attractions is known as Hell Street, due to the great noise that all of them in operation produce. And it is more than 100 attractions that are installed, making Seville the largest temporary amusement park in Spain. The space destined to it is next to the fairground.
This year Calle del Infierno will once again have a unique soundtrack, called 'Canal Feria'. It will be those responsible for the attractions who put it into action.
The Real de la Feria has 1,200,000 square meters, of which 300,000 m2 are part of Calle del Infierno, a real temporary amusement park for children and adults, where we can enjoy more than 500 activities ...
This year we will be able to enjoy new gadgets like the Maxi Dance, similar to the well-known "Kangaroo". There will also be a new roller coaster, called Wild Maus, which climbs up to 17 meters and can reach about 60 km / h. Another novelty will be the air attraction Projekt, which produces a swing that rises to about 15 meters in height.
For the little ones this year there will be new attractions for your enjoyment like the little roller coaster, Mini Mouse, or Moto Quads, etc.

3. The beginning
It is the week most awaited by the Sevillians. During the days that the fair lasts the city is dressed in colorful lanterns, they decorate the booths and dance, eat and ride on horseback. Among other things, the Andalusian capital will see those days and see you. If already in itself Seville has a special color, it is in April when more shines and not only for its cover lit with thousands of light bulbs. Because during the fair the night is lived with intensity, as the song says: "The night laughs in Seville, and embraces with the dawn."
In the beginning it was a fair to buy and sell cattle and was promoted by a Basque and Catalan trader who in 1846 requested permission to do it. Already then there was an area prepared to rest, drink and eat something between treatment and treatment. From that year and until 1973 it was celebrated in the Prado of San Sebastián and counted on only 19 booths.
4. Gypsy dresses
The flamenco or gypsy costumes are inspired by the dresses worn by the peasant women, gowns tight at the waist and topped with ruffles. When they checked for the feminine body that these dresses had, they were soon imitated by the women of the capital.

5. The horses
At noon the traditional horse-and-hitch ride begins. Until 8 pm, it is usual to see the elegant horses ridden by horsemen and amazons dressed in typical costumes and strolling through the fairground. Only in 1990 there were no horses due to the African horse sickness, an image unusual because they are part of the fair.
6. When is the fair
Holy Week determines the date in which it takes place. Thus, the April Fair is held one or two weeks after Holy Week, depending on whether it is early or late April. If it is late, so that the whole fair is not in May, it leaves a single week of difference between one and another celebration. This year 2017 the Fair opens with the night of the "pescaíto" on Monday 29 Saturday, April 29 at 24:00 hours, when "El Alumbrado" lights up, thousands of light bulbs that illuminate the cover and the streets of the enclosure, And ends on Saturday May 6 at 12:00 pm with the launch of fireworks.

7. Gastronomy during the fair
During the fair week it is customary for the huts to serve a selection of fried fish and other seafood. This is known as the "fishing night". Other typical dishes present throughout the week are Iberian, cheese, chickpeas with cod or fritters and churros, called in Seville «calentitos».

8. The Rebujito
It is a typical drink only since the beginning of the 2000s and has been popularized ever since. It consists of serving the traditional chamomile (Sanlúcar de Barrameda wine) with lots of ice and lemon-lime refreshments. Although it is said that they invented it in a town of Cordova, it is habitual to find it in all the Andalusian fairs.

9. The booths
There are public and private. They are an important part of the fair and are distributed throughout the fairground, being more than 1,000. Much work is done in its decoration, for which we use lace, shawls, lattices, etc. Every year, the city council awards prizes to the best decorations

10. Caseta Turismo de Sevilla
This year, for the first time, hotel customers will have a fair booth located in C / Pascual Márquez, 225, with free and free access.
It will proceed to distribute 30,000 invitations, mainly, through the Association of Hotels of Seville and Province. The invitation includes the address of the house (C / Pascual Márquez, 225) and on the obverse is a space to put the seal of the hotel. Each tourist will be the bearer of their entrance, which will be controlled for access.

11. The Cover
The City of Seville has announced on Thursday the design chosen for the cover of the April 2017 Fair, which will feature the 25th anniversary of the celebration of Expo 92, the Cartuja and the year Murillo.

It has been precisely along with the old ceramic ovens of the monastery of La Cartuja where the winning design of the contest has been announced, to which up to 117 proposals have been submitted and whose author is made with a single prize of 5,000 euros.
The ruling of the jury highlights the symbiosis of the industrial architecture of the Monastery of La Cartuja, with references of Expo 92, which in 2017 will be 25 years, as is the sphere or the Pavilion of Navigation, as reported by the City Council Of Seville in a statement. The Carthusian representation has been concreted in the Bottle Neck Furnaces that were designed by Pickman for the factory, decorated by ceramic motifs inspired by their creations, along with which the winning project has been known precisely by institutional representatives. These pillars are joined through the arches of the Pavilion of the Future with the central column, in which floral representations of the flags of participating countries are inserted surrounding the central figure of the mascot, Curro.

The cover of the Expo 92 sphere is presided over in an orange tone, which replaces the original red and simulates the effect of the sun over the passage of time. The figure of the painter Murillo appears reflected through floral and ceramic elements, artistic panels collected in the central column and the signature of the author.